Challenges with Agriculture Data Use and How to Overcome Them

When I talk to people who’ve worked with Farm Market iD in the past, I will occasionally hear that they’ve tried using data but it hasn’t worked well for them.

Since I’ve seen success first-hand from a number of industries – including financial services, grain, seed, retail – this takes me by surprise. So I often ask them questions about what they’ve done with the data to get such disappointing results.

Here are some of the answers I get:

If you want to start achieving results with the data at your disposal, here are three ways you can overcome these challenges. 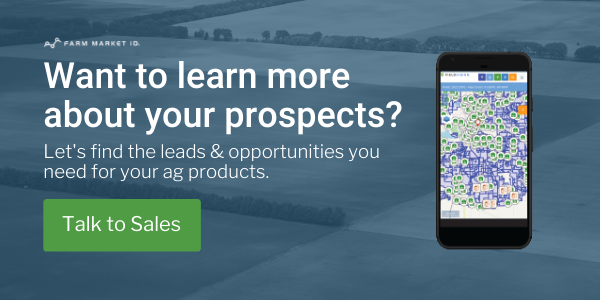 Get your whole team on board

Just one person using data isn’t going to have a company-wide impact. Even if that marketer or salesperson is able to increase the number of leads or closed deals they generate, that impact is probably not going to be move the company as a whole, especially in a large company.

That’s why you must work to get the whole team engaged and on board if you want to move the needle.

And that’s not just your marketing, or sales team, or your executive leadership. Everyone needs to be on board with using data to drive their decisions and processes. While everyone is going to use data differently, the source of data needs to be the same across the team so everyone’s moving in the same direction, and monitor and track your success.

This can be daunting. A lot of teams are hesitant to disrupt their marketing or sales processes. “This is the way we’ve always done it” may have worked in the past, and no one wants to rock the boat.

As a leader, there are two ways you can get people to adopt data:

These two methods aren’t mutually exclusive. You’ll likely use a combination of the two approaches.

But the end goal is the same: get your people using data so you can see the impact it will have on your entire company.

Run multi-channel rather than single-channel campaigns

When marketers try a new tactic for communicating with their audience, often they’ll do a test run to see if it generates results. If it doesn’t, then they’ll avoid using that tactic in the future.

Marketers using new data can sometimes run into this trap. They’ll run a one-time, single-channel campaign – maybe a targeted email to a grower list – and if they don’t see “good results,” they’re not going to follow-through with that source of data.

Here are some of the issues with that approach:

Insufficient testing. A one-time campaign can only tell you one thing: how that one-time campaign performed. There’s no way to collect enough data in a single test to give you insights on how to market in the future. There are many factors in play when it comes to marketing that may have nothing to do with the data. Running multiple tests will help account for intervening variables and get to the root of what’s causing low engagement.

Single-channel campaign. Sometimes, the audience you’re trying to reach is more interested in a channel you didn’t test. Maybe a digital ad or Facebook ad may be the best way to connect instead of email. Using integrated, multi-channel campaigns generates a greater overall ROI, so using a single-channel campaign is already shooting yourself in the foot.

Assuming the problem is with the data. If you know you have the right audience but aren’t seeing results, the problem is likely with how you’re communicating with them and the timing. It’s tough as a marketer to admit, but sometimes your messaging just isn’t resonating and you have to change your tactics. That’s why it’s important to test and try different things so you know what audiences, channels, timing and messages are going to drive the results you want.

Learn more about the farmers you’re selling to

When you’re reaching out to farmers, think about who you’d rather reach out to. Wouldn’t you rather contact someone who you understand and can offer detail suggestions to? For example, if you are selling seed you want to make sure the farmers you are reaching out to grow the crops you have seeds for.

Now think about it from the farmer’s perspective. Do you think they want to spend time educating salespeople on their farm? Or do they want to talk to someone who can kick off the conversation with enough understanding to help them solve the problems they’re facing?

At the end of the day, your goal is to close deals. The more rapport you have with the farmer at the beginning of the conversation, the better. The more tailored your sales offer to the needs the farmer is facing, the better.

Success with data means taking the time to learn about the operation and the specific needs the farmer is facing. You can’t do that with just a name and address on a list – there’s a lot of information that you’ll need to gather to have these conversations.

But when you invest in reliable, accurate data, you can sell faster and more effectively than before. 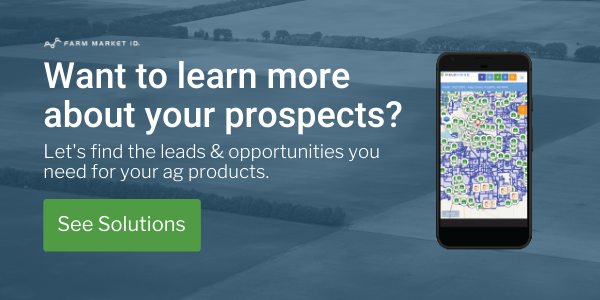